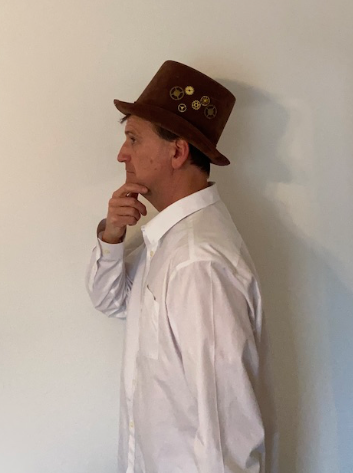 Rumors are running un-checked that Dave is working to bring the old gang back to feature on his new album. First we heard that he lured fiery guitar legend Lars "Bedhead"  back into the fold with a lucrative contract and plenty of jellybeans.  Lars is known to get distracted quickly so we will see how long Dave can keep him focused on the riffs and out of the jar.

Now we are getting reports that bass legend SteamPunkPondering might be coming out of the lab.  Yes, SPP is apparently pondering taking off his astrophysicist hat for a couple months and putting the top hat back on.  He says his SteamPunk, mosh-pit, platinum record days may be over but he still has a couple more stellar bass lines to lay down before he turns back to the stars and rockets back into the unified field.

Wow, that's almost the whole crew.  There is just one more member of this hat trick plus one to bring it all home.  It will never happen.  We all know that infamous fourth member and Dave vowed never to talk to him again after that disastrous final tour culminating in the unfortunate incident with pastry Chef Ramoneesh and the eclairs.  BUT!...if this happens, if Dave can pull this off,  it would be epic dude.  The air is on fire with anticipation.  Stay Tuned!!